Absent Friends, We will Remember them.

Marched on but not Forgotten

Good afternoon, my name is Jim Dawson and I am a member of the Hampshire Caledonian Pipe Band.

I am honoured to have been asked to say a few words about Cameron and his involvement with the Pipe-Band.

I first met Cameron ten years ago at the Marchwood Military Port where the Band practiced at that time.
He was the first person to extend a hand of friendship and welcome me into the Band.

When he was a teenager in Scotland, Cameron was a fairly accomplished piper. On one occasion he played for Her Majesty the Queen, but he did`nt pursue this skill when he enlisted into military service.

Cameron joined the Band in 1992 as he was keen to restart piping and he was initially taught there by the late Jimmy Wright. He continued his tuition under the direction of Sam Boyce, our present piping tutor.
The Drum Major of the Band at that time was Joe McDonald, and on his retirement Cameron `stepped-up` to the role.
Cameron became a very good Drum Major, always immaculate in dress, and authoritative with his commands.
He had an extremely loud booming voice, which could be heard half a mile away !

On occasions when the Band was short of a drummer Cameron would step-in and play either the Tenor Drum or the Base Drum, which-ever was required, such was the versatility of the man. These efforts were greatly appreciated.

As his interest in piping continued, he recently enrolled on a residential piping course at the College of Piping in Glasgow.
During the first practice on his return from Glasgow, he pestered me all evening to show him how to tune his pipes !

Cameron was appointed Chairman of the Band, a post which he held for many years, providing good leadership and direction. In his role as Chairman he gave us the benefit of his extensive organising skills, and he never held back when faced with any contentious or sensitive issue needing to be resolved.
Again his leadership qualities steered the Band in the right direction, and as a result, he earned the respect of every member of the Band.


Cameron had a wicked sense of humour, and a hearty laugh.
On many occasions at carnivals when the Band had to march and play a considerable distance without a pause, I`d appeal to him to give us a breather between tunes as we were not as young as we used to be, he always replied, - “ Wheesht man............. you need the practice”. !

So finally Cameron, on behalf of all your friends, both within the Band and wider afield in the piping fraternity, many of whom are here today to honour your memory, thank you for all that you have done for us over the years.

You were a stalwart member, and a genuinely nice bloke who will be greatly missed – but never forgotten ! 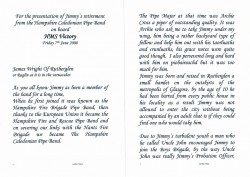 Presentation speech by Harry Norwood on Jimmy's retirement from the band. 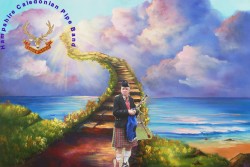 Marched on but not forgotten 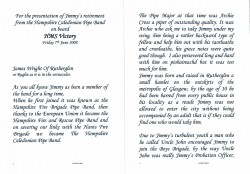 Presentation speech by Harry Norwood on Jimmy's retirement from the band.

Jimmy Wright was a stalwart within the Hampshire Caledonian Pipe Band, he was a very good piper, dedicated and very enthusiastic in everything he done.

It was always a pleasure to turn up at practice nights knowing Jimmy was going to be your tutor for the evening, with his great rapport and sense of humour we would learn a lot more or maybe we did not want the sharp end of his tongue if you hadn't practiced during the week.
Jimmy thank you from all at Hampshire Caledonian Pipe Band and the Piping World.