The band was formed as the result of Pipe Major Archibald Stafford Cross, (Archie Cross) who was the :Pipe Major of the Rose  & Thistle Pipe Band of Gosport.   He left the Rose  & Thistle after a disagreement with some of the committee, a fair section of the band also left as a result of Archie’s departure from the band, approximately 7 pipers and 2 drummers, this group encouraged Archie to form a new band and after an inaugural meeting in the Seagull Public House in Portchester in August 1978, approximately 20 attended.   Archie agreed to start the band with him being elected as the first Pipe Major.

The band is dressed in black Argyle Jackets, Prince Charles Edward Stuart Tartan kilts, the kilts initially being made and supplied by Ewan MacKay of MacKay & Stewart Kilt Makers of Glasgow and Renfrew.   Ewan is an excellent kilt maker and close friend of Archie, between them, they opened a shop in Portsmouth called “A Touch of Scotland,” the shop carried out business in Palmerstone Street Portsmouth for some years before folding.

Archie born on 28th April 1936 in Musselburgh East Lothian, Scotland, his piping career began at the age of 10 years.  He then at the age of 12 joined the 1st Musselburgh Boys Brigade with whom he became an accomplished piper winning several piping competitions even at this young age.   In May 1957 he enlisted in the Seaforth Highlanders who in November 1960 amalgamated with the Cameron Highlanders and later became the Queen’s Own Highlanders   At this point he was a Pipe Lance Corporal and in 1966 he was promoted to Pipe Corporal and gained his British Army Pipe Major Certificate in the Army School of  Piping in Edinburgh Castle and in 1972 he was appointed Pipe Major to the Army Apprentice College  at Harrogate and served there until 1976 when he was seconded to the Royal Brunei Regiment where he was Pipe Major.   On completing his army career in 1979 he stayed on under contract for three years as Pipe Major to the Sultan of Brunei Forces until 1982.   He then returned with Pam to Portsmouth, Hampshire.

The Tullochard Pipe Band’s first practice location was held in the  village hall in the village of Colden Common this was arranged and organised by Samuel Boyce,  our stay there was very short due to the local Girls Guide leader out staying her allotted time, Sam  had booked the hall for 8 pm till 10 pm and the Guides leader was still there with her Girls at 9.15pm  we then marched in with pipes and drums blaring out, the Guide leader was not amused and complained, result we were asked to leave. We then practiced at the Village Hall in Otterbourne  this was also short lived, the natives of which complained about the noise so we had to  move again, and this time we  moved to Portchester Community Centre where the band stayed for approximately 1 year or so.

The band then moved to the Hampshire Fire Brigade Headquarters near  Eastleigh.  This move was organised by Joe MacDonald Queen's Own Highlanders Ret., who was the band's Drum Major.   A Drum Major of considerable skill.  He was Senior Drum Major at the Edinburgh Tattoo on several occasions and a fellow colleague of Archie.   Both of them were respectively Pipe Major and Drum Major in the Queens Own Highlanders now called The Highlanders.   During this period I became the band Treasurer and held this job for several years until Paddy Greyell one of our pipers, became Treasurer.

One of the founding members was Sam Boyce who left the Rose & Thistle at the inaugural meeting when Archie started the band.   He remained a stalwart of the band throughout and is one of my closest friends, an Irish man of great wit of which I have benefitted from on many occasions, Sam has tutored many of our learner pipers and still does, they receive the sharpness of his tongue when making a mistake.

Due to our representing the Hampshire Fire Brigade at a great many band engagements it was agreed to change the band’s name to The Hampshire Fire Brigade Pipe Band.   At this time piper Jimmy Wright an ex piper of the Royal Corps of Transport joined the band.   Jimmy and I became lifetime friends and caused lots of problems for the Pipe Major with our repartee.   We had many competitions to see who could drop the other in the proverbial _ _ _t.

The Fire Brigade at the same time had a Drum corps based on the style of the Royal Marine Bands (Drummers) and both the Pipe band and Drum corps jointly carried out combined engagements.   The Pipe Band leading the way for a spell and then marking time to let the Drum Corps march through the ranks and so on during the period  of  the engagement, this worked well and became a feature of our various outings.

Archie was also the Treasurer of the Queen's Own Highlanders Association which I aided him in transcribing his association accounts on to the computer for printing and onward transmission  to Queen's Own Highlanders HQ Inverness.   On the morning of the 21st June 2001 I was visiting Archie to confirm his accounts only to be told by Pam that he was ill.   Returning to his house on that afternoon only to find that his condition had deteriorated and he had to be moved hurriedly by ambulance to the Queen Alexandra Hospital, Cosham, he died soon after his admission, very suddenly and unexpectedly at the age of 65.

Archie’s funeral service was held in St Mary’s  Church, Alverstoke, Gosport with Archie’s coffin being piped into the church to the tune “Lord Lovat’s Lament” by piper Bill Maitland one of our leading pipers,  the service was conducted by David Loftus, a lay preacher and former Queen’s Own Highlander, Eulogies were delivered by Colonel Andrew Duncan Queen's Own Highlanders, Ret’d. In addition, Pipe Sergeant David Clark.  David also played “Flowers of the Forrest” at the conclusion of the burial ceremony.

Archie’s many friends and colleagues in the Piping world joined forces to give P/M Archie  Cross a very colourful and moving send off, the resultant Pipe band consisted of over 40 pipers, 16 drummers and 3 drum majors with Drum Major Joe MacDonald leading the procession.  The Cortege was marched from St Mary’s Church, Alverstoke to the graveside at Ann’s Hill Cemetery, Gosport a distance of some 2 miles.

Due to the sudden death of Archie, the band was short of a Pipe Major, the natural choice would have been Pipe Sergeant David Clark who would have been Archie’s choice, he was also one of his prodigies, however David declined as he had left the scene due to him leaving the Royal Navy and now working all over Europe, this resulted in John McDonald becoming the Pipe Major in July 2001   The band continued for a few uneventful years until the members and committee fell out with the Pipe Major which resulted in him, his daughter and son leaving the band under a cloud.  Harry Norwood stood in as Pipe Major from 2011 to 2013.

During this time the band moved again to The Marchwood Military Port, this move was arranged by Piper Jimmy Wright and the band stayed there until yet another move this time to the British Railway Workshops at Campbell Road Eastleigh and then on to where we are now at St Alban’s Church North Southampton .

When Jim Dawson a piper who was well known by the band members agreed to step in and take over the Pipies job.  Jim is an excellent piper who had played with some of the top Grade 1 Bands in Scotland.   He is as fine a piper as Archie Cross and was well received by the band, however, we all knew that this was a stop gap and after 2 years the band were again looking for a new Pipie.  Richard Smith who was the Pipe Sergeant of the local St Andrew,s Pipe Band of Hamble Le Rice was elected in 2014 to take up the position of Pipe Major and remains as the Pipe Major to the present date.

The band under the auspices of Archie competed at Banbury and Slough on two or three occasions the competitions organised by the Royal Scottish Pipe Band Association (London and Southern Branch).   We competed later with Jim Dawson as Pipie in a couple of competitions at Stortford again organised by the RSPB Ass. L&S B. Whilst not lifting any silverware the band did gain a good deal of experience from these outings.

Throughout the years the band has been financed by two main sources, one by band members paying a monthly fee of £5 per month and fees gained from a great variety of different kinds of engagements, Numerous Parades, Carnivals, Fairs, Birthdays, Cruise Ship send offs at Southampton Docks, Various Tattoos at Wessex, Salisbury, Yeovil, Charity Outings and a rather grand Highland Show held in the Royal Albert Hall, London, as a result of this we have remained continuously solvent.  In the main most of our moves were aimed at keeping down the cost of the rent at  the various locations, which was one of our biggest expenditures together with cost of maintaining uniforms, Drum and Pipe equipment.

As this in the main only covers the founding and early years of the bands history I hope some of the future members will continue its history.

Long may the band continue in both strength and musical standard?

The Hampshire Caledonian Pipe Band bestowed Honorary membership on several members for their Dedication, Support and Expertise to the band, their names are as follows:- 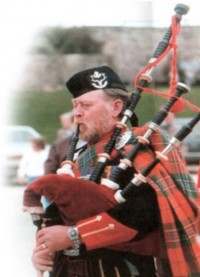 THE EARLY YEARS OF THE HAMPSHIRE CALEDONIAN

The band was formerly named The Tullachard Pipe Band; this name was devised by Frank Mac Donnell  Radcliffe LLB (Lon) FSA (Scot) who became the bands first Treasurer, the name translated from the Gaelic as “A High Green Knoll”.   From the onset Archie set up a committee so that the band would be run on a democratic manner.   The first committee consisted of a Chairman, Secretary, Treasurer and three band members plus the Pipe Major who had the authority over musical direction and the power to select the Drum Major.   This system has been followed throughout the life of the band, the present Chairman is